Thai people love to party and are highly superstitious.  Combine the two and you have the perfect excuse for celebrating Troot Jin, Chinese New Year, whether your ancestry traces back to China or not. 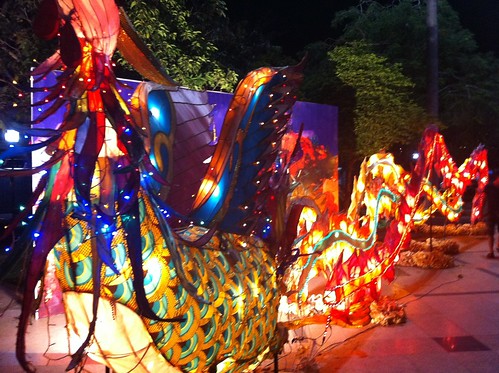 Leaving behind the debate over the origins of Thai people in general (many scholars agree on southern China), waves of Chinese migration since the Ayutthaya period 600 years ago have brought Chinese migrants to Thailand in search of wealth, prosperity, and freedom from majority persecution for many minority groups.  One estimate puts the number of Thai people with Chinese ancestry at 6 million, which is around 9% of the country’s population.  Most of these people have been folded neatly in Thai society but many still hold to Chinese customs out of respect for their heritage.

Troot Jin is one custom that is certainly not going to die out in Thailand anytime soon.  Celbrated by Thai-Chinese communities around the country, the festival is also enjoyed by other Thais as an excuse to eat, drink, be merry, and enjoy the action.  And there’s plenty of action.

The Chinese New Year is traditionally the first day of spring in the Chinese calendar and marks the start of the agricultural season after the fallow winter.  Leading up to that day, families would clean out their homes and prepare gifts and food.  Usually in the morning of the New Year’s Day, families visit Chinese temples and shrines to give offerings of food, drink, liquor, and items made of paper representing money, clothing, gold, and more.  Incense is burned by the bushel and prayers made to various gods and goddesses (traditionally those of wealth and agriculture), and importantly the family’s ancestors.  After prayers, the paper objects are burned ceremoniously.  It is believed that the objects will reach the ancestor spirits and become real money, clothing, and gold for them.  Firecrackers are lit to close this ceremony and chase away the old year and any bad luck associated with it.

Different families will chose different lucky times to make their offerings, so in a larger city you’ll hear deafening firecrackers going off all through the day.  Thai-Chinese families will travel around visiting their relatives and friends during the day, usually bearing at least 2 types of special gifts.

One is oranges.  With the Chinese word for orange sounding the same as the word for luck, these symbols of luck are brought to relatives’ homes and usually exchanged in pairs, so that oranges pass around town.

The second gift that defines Chinese New Year is the Hong Bao.  These are red envelopes containing money and embossed with a new year’s blessing that are exchanged by family members with wishes of good luck.  In fact red is the Chinese colour of luck and vitality, and most Chinese Thais will dress in red for the day and decorate their homes with red good luck banners.

There are a few interesting prohibitions for Troot Jin.  For example, eating fresh tofu is avoided on this day as it is considered unlucky.  Sweeping the floor is said to drive the good luck out of your house and is also taboo on New Year’s Day.  On New Year’s Eve, doors and windows are opened to let the old year leave and the new year come in.  In general, families try to say and do lucky, positive things only for the whole day to make sure that no bad luck accrues to them. 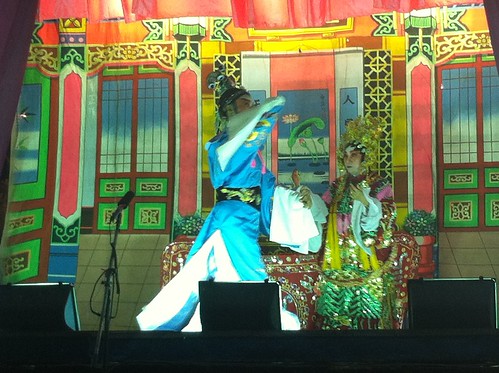 Activities go on throughout the day, building a fun and lively party atmosphere.

Aside from firecrackers, the sound most associated with Troot Jin is the banging of drums and high-pitched gongs which accompanies the lion dance.  Lion costumes are worn by two dancers giving the lions their four legs.  Homes and businesses hang cabbages at their doors to attract the lions (vegetarian lions?)  and people give them Hong Bao for visiting.  They are said to scare away evil spirits and bring luck.  During processions, dancers give fiery performances with the lion costumes jerking to the beats of the drums and splashes of gongs.  Often acrobats are involved with street shows as well, sometimes climbing tall, poles to grab Hong Bao stuck to the tops of them by people reaching out of 2nd-story windows.

Huge processions with lion dances, floats, traditional drumming and dancing shows, and firecrackers are held in Nakhon Sawan city and the Yaowarat neighbourbood of Bangkok.  In both locations Chinese-Thai populations are high and thousands of people participate in the day’s evets.  Cultural performances are  held around Thailand in areas with large Chinese-Thai populations such as Phuket, Chiang Mai, Chiang Rai, and Khon Kaen.

Food is another important part of Troot Jin.  Eating good food and being well fed on this day is said to extend for the whole year ahead.  In Thailand food is always plentiful, so for Troot Jin the words ‘excessively abundant’ may be necessary.  Thai and Chinese foods are served in areas with festivities, with one special food seen everywhere.  That’s a snack called kanom-ii, a soft chewy cake made from pounded rice.  The normally pink cakes are supposed to be easy to chew and representative an easy year ahead.

In the evenings, many Chinese-Thai communities will meet and enjoy banquets called to jin (Chinese table) eaten at round tables with red tablecloths.  Meals are sumptuous multi-course feasts that last for hours.  During the meal, MCs will announce monetary contributions to the community’s local fund or Chinese temple by saying a name and amount then ringing a big gong.  Diners seem to enjoy the boisterous game show atmosphere.

Niu is the name given to travelling performances of Chinese theatre, largely similar to Bejing Opera but reduced in splendour.  Troupes are hired to perform in their stunning make-up and costumes from late evening well into the wee hours of the next morning and shows roll on with singing, acting, and light martial arts.  Nobody seems to understand the language used (not even actual Chinese people) as scripts are in ‘antique Chinese’ but the stories are usually easy enough to follow anyway.

To end off the luckiest day of the year, what’s more appropriate then Chinese-invented fireworks?  Displays can vary from a few bursts to a 20 minute extravaganza depending on the size of the local Chinese-Thai community.

If you’re not Chinese or even of Chinese ancestry, you can still gt involved by sampling foods, watching parades, and taking in the cultural shows around the area where you live.  Because Chinese immigrants to Thailand generally formed a merchant class, you’ll find the action in towns and cities while out in Thai villages nothing would be noticed out of the ordinary.  For the biggest and best celebrations, look to Nakhon Sawan or Bangkok.

Wherever you celebrate, enjoy yourself and have good luck.