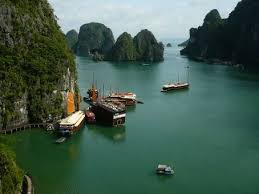 Halong Bay lies in Gulf of Tonkin to east of Hanoi city in Vietnam. The Bay includes around 3000 small islands that together form a huge limestone seascape that is the most natural and beautiful wonder in Vietnam.

The primary attraction in Halong Bay is limestone scenery. The time you are in a ship, you can just switch on your camera and enjoy clicking the beautiful sceneries. Apart from the fantastic views, tourists come at this place to explore caves in the area that can be accessed from charter boats only. You can even visit the Hang Sung Sot cave that has beautiful and magnificent chambers of the rock formations including the popular fertility symbol.

It is believed that the Halong Bay was made when some dragon which lived in mountains ran towards the sea its tail gouged out crevasses and valleys, the regions dug up by the tail became all packed with water thus leaving just the high land visible. The geologists on other side, claim sea and wind erosion. The visitors will see a similarity with limestone scenery in Thailand.

The weather in Halong Bay can be changeable at times. The tourists between the months of February and April may not be able to appreciate the serenity and beauty of this place due to drizzly and cool weather conditions, during summer months, the boat operators may change their schedules as well due to fear of facing the tropical storms. It is best to visit this place in early Decembers to enjoy the magnificent blue skies and amazing scenery. 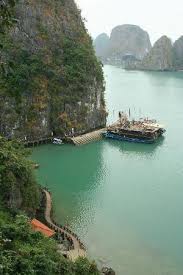 Sailing past evocatively shaped islets as well as the caves in Halong Bay may be a truly magical and exceptional experience. You can enjoy a whole day exploring grottos and islands, many of which actually house the religious shrines. Many of the well known sites are there in western part of Halong Bay and are generally overcrowded with locals and tourists. It usually makes for a relaxing tour in a private boat, getting complete details from a knowledgeable guide and sailing around less visited places of this shimmering, gorgeous bay.

Kayaking is a great activity that can be taken up at the bay. You can find some secluded bay and just let yourself soak in its wonderful surroundings. The water is just beautiful and mind blowing. Indeed, Halong Bay serves as one of the most recognized and highly visited tourist attractions in Vietnam. It is popular for housing a number of ecosystems like freshwater swamp forests, small freshwater lakes, sandy beaches, mangrove forest and coral reefs. The islands also feature amazing caves and grottos with beautiful stone formations as well as hidden ponds.

The Cat Ba National Park is a popular attraction in Halong Bay where you can enjoy sunbathing on beaches or hiking. You will not find any sandy beaches in the Bay but there are a few sandy strips on the Cat Ba Island, Lan Ha Bay that is off the island.

The grottos and mystical caves in this bay are featured with strange structures and shapes. One of the prominent among these is the Virgin cave that is also known as the Mid Gate cave and that derives its name from statue of a female lying on top of a flat surface of this cave. It is believed that the woman actually committed suicide in this cave as she was not able to return back home after she was married to some old mandarin forcefully. So the woman’s body turned into stone.

Make a plan to visit the Halong Bay in advance and enjoy the various places to visit and things to do.