Ayutthaya was once the capital city of Thailand and for the period of 417 years it served as the Thai center government. Now, it has been transformed into a historical park that maintains the ruins of the old famous Ayutthaya City. The city was under the rule of thirty three rulers of different dynasties and they have established their influence over the buildings and architectural wonders. The Ayutthaya historical park combines all the magnificence and grandeur of the old city that includes the ancient palace, temples, different architectural styles, and all those graceful artworks and ruins. Many temples were destroyed by the Burmese but you can still imagine what it was like in the past.

Presently, the Ayutthaya historical park is proud to be a part among the top cultural sites of the UNESCO. Therefore, it is undoubtedly one of the prime tourist attractions in Thailand.

The historical ruins that the Ayutthaya historical park features today were founded by King Ramathibodi I in 1350. At that time, the city of Ayutthaya was the capital of Thailand and it continued to be the capital for 417 years, until 1767, when it was ruined by the Burmese army. The Fine Arts Department felt the need of restoring this historical site and started the renovation work in the year of 1969. It was declared as a historical park in 1976 and after that even more serious renovation work was conducted. It was 1981, when the site got its reputation as a UNESCO World heritage site.

How to reach there

The Ayutthaya historical park can be accessed from Bangkok by roadways, railways and water route. From the Northern Bus Terminal of Bangkok to the Ayutthaya’s bus terminal in Naresuan Road, there are frequent bus services. The journey time is around two hours. Those who prefer railways, they can reach the Hua Lamphong Station in Bangkok where there are hourly train services to Ayutthaya from 4:20 am to 10 pm. The journey time is around one and half hours. Ayutthaya can also be accessed by boat. Mostly, such cruise trips are provided by the tour operators.

The surrounding of Ayutthaya is truly enchanting as it is encircled by Pa Sak River, Lopburi River, and Chao Phraya River. The main attractions of Ayutthaya historical park are:

This palace was used as a summer recreation by King Rama IV of Bangkok. Presently, you can find historical ruins of this place.

You can view the wide range of fabulous architectural styles in this building, which used to be a summer retreat of the Ayutthaya royal court. The place was restored later by King Rama IV. 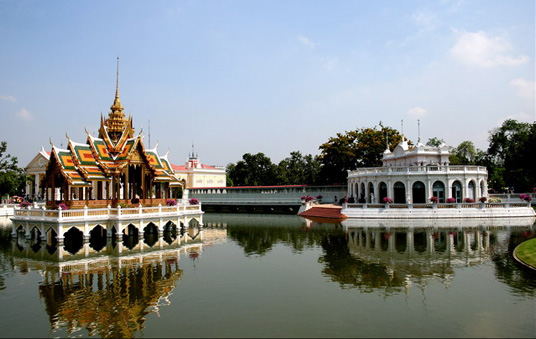 This was the most prominent temple during the high time of Ayutthaya and till date, it is one of the most important attractions. Before that, it was a residential palace that became a monastery under the rule of King Ramathibodi I. This residential palace was transformed into a temple and established as Wat Phra Si Sanphet after King Borom Trai Lokanat constructed new living quarters.

On the bank of the Chao Phraya River, this site is located and it resembles the famous Angkor temple. King Prasat Thong developed this temple in 1630 as a tribute to his mother.